Social media is a crucial part of teenagers' lives, impacting many aspects of their sense of self. Here's how it affects teenage self-esteem.

As a parent, you may be concerned about how all that time on social media affects your teen’s mental health and self-esteem.

Teenagers rely heavily on social media to build and maintain relationships, be creative, and learn more about other cultures and diverse perspectives.

However, social media can also have negative effects on teens. For example, one study found that social media use among teens is linked to anxiety, depression, poor sleep, and low self-esteem.

During their adolescent years, teenagers go through the process of identity development, part of which includes their sense of self and self-image.

Since teens spend so much time on social media, their sense of self can be affected by the feedback they receive and the content they interact with while using social media platforms.

This article will cover the impact of social media use on a teen’s self-esteem — both positive and negative.

Social Media and Self-Esteem: The Positives

It’s important to acknowledge that it isn’t all doom and gloom when it comes to teen social media use and self-worth. It can have positive effects, too — below are three of the most significant.

Social media can inspire young people to develop healthy habits, try something new, follow their dreams, and speak up about things that matter to them. Teens can also find positive online role models beyond the limitations of their local area.

Moreover, many brands and influencers create valuable content providing instruction and support for cultivating a positive outlook and building healthy habits, such as meditation and exercise.

Social networking sites can give teens and young adults a sense of belonging and acceptance because they allow them to access communities of people who share the same ideals or challenges.

This is particularly true for people who feel isolated or marginalized, such as LGBTQ youth or teens with mental health issues.

A wide variety of mental health resources are available on social media apps, from Discord servers to Facebook mental health support groups. These resources can be extremely helpful for teens with mental illnesses or disorders.

For example, one study found that patients with severe mental health conditions, such as bipolar disorder and schizophrenia, used social media to feel less lonely and connect with people who have undergone similar experiences.

In addition, companies that provide mental health tools and resources can reach the people who need them by sharing content on social media.

The Negative Effects of Social Media on Teenage Self-Esteem

As you can see, social media isn’t all bad for teenage self-esteem. However, it does have a dark side that can negatively impact teens and lead to lower self-esteem.

Unfortunately, cyberbullying is a reality for 59% of U.S. teens who report having been bullied or harassed online. A similar number says it's a major problem for people their age. The effects of cyberbullying — such as sadness, anger, frustration, and humiliation — can all contribute to low self-esteem.

Additionally, social media nurtures cyberbullies, who can get away with things they wouldn’t be able to say face-to-face. Some teens engage in cyberbullying online because of the anonymity it provides and the fact there’s no retaliation.

According to a study by the University of Georgia, teenagers who are addicted to social media are more likely to engage in cyberbullying.

The way adolescents perceive their physical appearance contributes significantly to their self-esteem. Thanks to airbrushing and filters, social media often portrays appearances that are difficult or unrealistic to obtain.

This can make teenagers feel insecure about their looks, and many agree that social media has affected their self-esteem. In extreme cases, this can lead to problems such as eating disorders.

When teens don’t receive the expected or desired feedback and engagement on social media, such as follows, likes, and comments, it can induce feelings of low self-esteem.

Teens may also feel pressure to perform or post the “right” kind of content, leading to a preoccupation with external validation and causing stress and anxiety.

4. A Place to Hide Problems

For teenagers experiencing problems — whether at school, home, or with their mental or physical health — a carefully curated and edited feed can act as a smoke screen.

Someone posting selfies might look fine on the outside, but they could be masking serious issues, making it harder for parents, friends, and family members to see that they need help.

On social media, teens (and let’s be honest, all of us) curate the highlights of their lives. The resulting content only shows the best and most enviable moments while concealing their efforts, struggles, and the mundane aspects of day-to-day life.

Social comparison comes naturally to humans, and it can be easy for teens to compare their real lives with someone else’s highlights reel, fueling self-doubt and leaving them with lower self-esteem and self-confidence.

Peer pressure has existed since before social media, but social networks have exacerbated it. With the constant exposure to and feedback from more people, there are more sources of peer pressure than there were for previous generations of teens.

The temptation to gain popularity and go viral can also lead teenagers to take risky actions for the sake of likes and follows.

Help Teens Have a Healthy Relationship with Social Media

Social media can be a powerful tool for helping teenagers manage their mental health, but spending too much time scrolling or trying to get likes can have a negative impact on teenage mental well-being.

If you need more resources to support your teen’s mental health and social-emotional wellness, visit the mental health section of the Lessonbee content library for insights into health, learning, and well-being.

Subscribe to get notified on Lessonbee updates and new blog posts 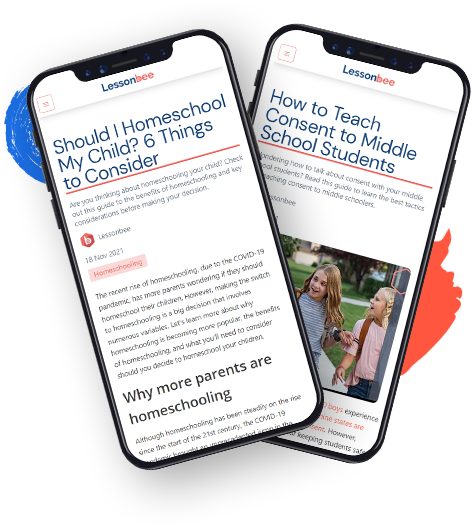 How to Help Your Child Deal With Online Harassment Online Safety for Parents: How to Safeguard Your Child in the Digital World 8 Ways to Teach Your Preschool Kid About Money